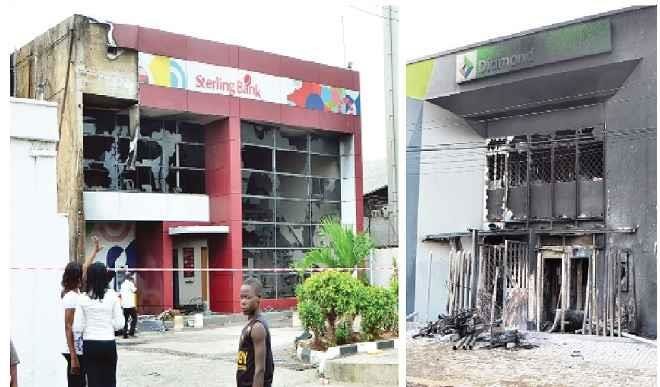 Angry tanker drivers yesterday burnt two banks on Creek Road, Apapa, following the alleged killing of one of their colleagues by a mobile policeman.

The tanker drivers first set Sterling Bank on fire after the bank’s management failed to hand to them the policeman who ran into the bank.

A witness Samuel Adeyemi said that as the Sterling bank burnt, the mob learnt that the policeman had dashed to the Diamond Bank building next door, to which they shifted and also set on fire.

It took the arrival of operatives of the Rapid Response Squad (RRS) and anti-riot policemen to disperse the mob,Daily Trust reports.

The crisis was said to have been sparked by indiscriminate parking of trailers in front of many buildings, including banks, on Creek Road by tanker drivers who were in Apapa to lift petroleum products. 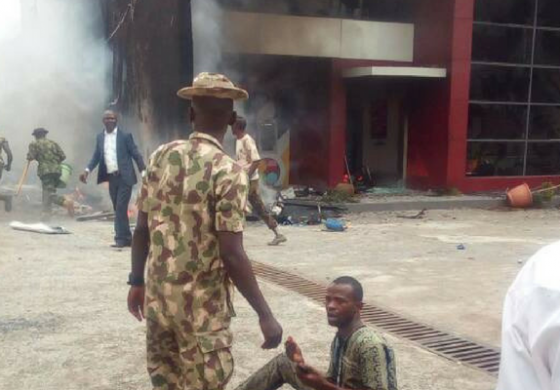 Adeyemi told Daily Trust correspondent that the policeman pointed his rifle to the sky and fired, but the driver remained unperturbed.

“As the driver charged at the policeman threatening with the knife in his hand, the policeman pointed directly at him and fired. He fell and died on the spot. Other drivers, seeing their colleague fall, charged towards the policeman. The policeman then ran into the bank. Within minutes, other tanker drivers gathered, took over the entire Creek Road demanding that the policeman be handed over to them,” he said.

The Lagos State Commissioner of Police, Fatai Owoseni, said on phone that the crisis had been brought under control.

He said no bank was destroyed and that armed policemen were on guard in the area to prevent a further breakdown of law and order.