HomeCelebrity GistsGhen Ghen! Blac Chyna’s mother responds to all the drama going on between her daughter and Rob K
Celebrity Gists

Ghen Ghen! Blac Chyna’s mother responds to all the drama going on between her daughter and Rob K 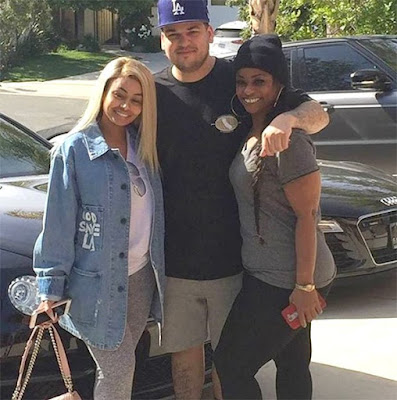 “Rob Kardashian’s ex mother-in-law to be” – was how Blac Chyna’s mother, Tokyo Toni described herself as she announced that she was finally going to weigh in on the drama between Ron and Chyna, and also address all the parties involved. She said:

“Hello world, this is Tokyo Toni, and I’m going to be sending a video out onto social media about Rob and Chyna, the Kardashians, the media, the lawyers, which will be Miss Bloom (Chyna’s lawyer), as well as Rob Shapiro (Rob’s lawyer).
“I believe that I have all rights to say what I have to say. Why? Because I feel somewhat in the middle of what’s going on and this isn’t a good feeling for me. I try to remain silent because I was always told silence is golden, however untrue.
“I want to speak on everything that’s going on, I’m going to give my opinion, I’m going to give facts. Why? Because I’m Dream’s grandmother, Chyna’s mother, King Cairo’s grandmother and Rob Kardashian’s ex-mother-in-law-to-be.”
Watch the video below:
READ ALSO  Checkout Adunni Ade And Gospel Singer Tope Alabi Makeup Free Faces
Prev postNext post
Use your ← → (arrow) keys to Continue Reading
Tags:trendope Latest
Share on FacebookShare on Twitter